Talk about someone who truly bleeds Bekins. Ralph Bingham has worked with Bekins Van Lines in some capacity since he was 24 years old and celebrated 36 years with the company at the beginning of August.  Bekins hasn’t just infiltrated his work life though.  Look inside Bingham’s garage and you will see something out of the ordinary: a refurbished 1929 Ford Model A Tudor, decked out in Bekins’ signature colors of green and white.

Talking to Bingham, you can hear the pride in his voice when he speaks not only about his life work at Bekins, but also of his hobby of restoring old cars, especially this Ford.  “I’ve had a lot of cars over the years, but none quite like the Ford. I started with this one and it means the most to me.” Refurbishing the car to its current condition was no easy task though.

At the age of 16, Bingham found the shell of the car at a local 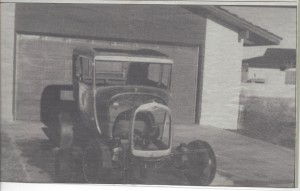 junkyard in his hometown.  There weren’t any seats, tires, or even an engine, but he was able to look past that and see what this car had the capability to be. He spent nearly four decades and almost $30,000 buying parts and laboring over the car, but to him, this car is priceless. “This car is in the same category as my wife and daughter – not for sale!”, Bingham says with a laugh. 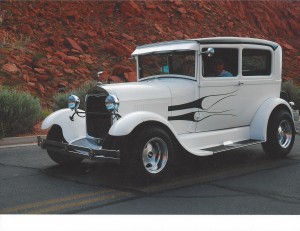 When asked one of his favorite parts about the car, he doesn’t hesitate when he says it’s driving it up and down the freeway.  “I get lots of thumbs up and lots of high fives.  I have a lot of people out there who think they’re friends with me because I’ve got a cool car.” For a car enthusiast like himself, this automobile is truly his pride and joy.

It’s employee loyalty at its finest when someone will deck out their personal belongings to replicate the brand image of their employer.  For Bingham though, there was never a question as to whom or what he would dedicate this automobile to. “To me, I always had a mental picture of this car as being a representation of my career. I’ve never worked for anyone else but Bekins. It was pretty automatic.” No matter where Bingham goes, he serves as a visual representation of not only Bekins Van Lines, but also of his storied career and love for the company as well.

Ralph Bingham has always been an agent-owner and a driver while at Bekins.  Never a fan of office work, he always hired people to manage the day-to-day operations of the business while he maintained the position of a driver. He spent and still spends most of his days delivering loads and shipments and interacting with the customers, cementing himself as the face of his agency, Dixie Moving & Storage. A self-declared people person, Bingham enjoys knowing that every day will be different and that he’ll spend his days talking and communicating with the people his agency serves. I can bet that he tells his customers about his Bekins-inspired Ford Model A, too.

Like what you read? Bekins employees are a talented and passionate bunch. Make sure you catch up on the rest of Bekins’ Sunday Spotlights.