Sunday Spotlight: Down on the Farm

Owning a cattle farm is hard work, and for the Gilmore family, it truly is a family establishment.  Located in the Florida panhandle, Gizmo Angus Farm is their pride and joy. With involvement in the farm spanning three generations, the Gilmore’s live and breathe this work and find that it’s a passion that the whole family can share and enjoy together.

So how does a family get started running a 200-head cattle farm? The Gilmore family says it happened gradually.  Farming has always been an interest for the Gilmore’s; in fact, Debbie and Ronnie Gilmore, patriarchs of Gizmo Angus, met while participating in 4-H.  When they got married and had children, they encouraged their two boys to also participate in the organization.

Their oldest son Lucas began showing steers at age 12 and was followed by their youngest, Jacob, a year later.  They chose to show steers based on the thought process that you can probably make more money with steers than you can with other animals such as horses.  Thus began the Gilmore’s love affair with cattle… and it hasn’t stopped since.

Debbie Gilmore bought her husband Ronnie his very first cow for his birthday back in 1991 and she says the rest is history.  The farm started as just a small plot of land at their house 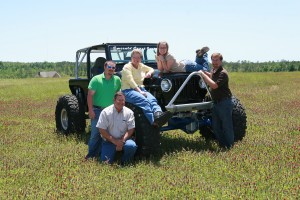 with only five cows to their name.  By 2001, when Jacob graduated high school, the family purchased 400 more acres of land and accumulated a total of 200 cows, 120 of those being mothers.

The operation has grown even more since then.  Their main focus on the farm is to sell purebred Angus bulls to commercial cattlemen which in turn help the cattlemen improve their own cow herds.  “You have to stay on top of what’s working in the industry,” Debbie explains.

This is especially evident in Debbie’s work studying cattle genetics.  Figuring out how to breed each cow is the linchpin of the family business and Ronnie even says that “Debbie is the brains of the operation”.  “She’s the one who leads this rodeo,” laughs Ronnie.

Whereas Debbie studies the genetics of the cows, Jacob and Ronnie’s passion lies in judging the cattle and looking for ways to improve them.  Even Jacob’s wife, who, according to Debbie is a “total city girl”, has even started getting involved in the operation.  “She’ll go out there and try and learn how to pick the best cows. She asks quite a few questions and has learned a lot about the cattle operations,” Debbie explains.

Jacob’s twin daughters, the third generation of Gilmore’s, have already picked out their own heifers. They may only be two years old, but they have already embraced life on the farm. 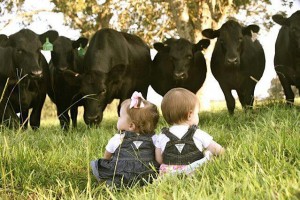 The girls enjoy riding in the family Gator and looking at the cattle with their mother and father.

Gilmore Moving & Storage began in 1955 by Ronnie’s father.  The moving company signed on to become an agent for our partner company, Wheaton World Wide Moving in 1979 and have enjoyed being a part of the network of agents ever since then.  Their favorite part of being a Wheaton agent? The fellow agents and friends that they’ve made over the years.  “We’ve truly appreciated and enjoyed the relationship with Wheaton over the past few decades,” Debbie said.

Make sure to keep up with the rest of Bekins’ Sunday Spotlights.