Moving with the Military

There’s no doubt that moving can take some adjusting. Relocating to a brand new destination can mean building new relationships, getting plugged into a new community, starting new jobs and the list goes on. Tackling this can seem like a daunting task. Can you imagine moving 14 times in 20 years?

“Within my 20 year career in the military, we moved around 14 times,” said Kevin Myers, Bekins’ Director of Military Services. “Before settling down in Indiana my wife and two sons became quite familiar with the moving process.”

Kevin and his wife Traci, Senior Move Manager, have worked a combined total of 19 years at Bekins Van Lines. Before joining the van line, Kevin, Traci and their two sons, now 25 and 28, grew very accustom to life on the move as a military family. 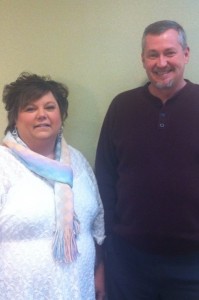 Of course, it only made sense for them to work for a moving company after being required to move multiple times in the military. Having such a perspective allows them to empathize with many of the customers. In this blog they offer insights only seen by those who have experienced both sides of a military move.

Talk to your kids

“I can remember one year in specific where we had to tell the boys that they were changing schools over Christmas break,” Traci said.. “It wasn’t always that short of notice, but there were times when we had to transition within a very short amount of time.”

There are certainly challenges that can arise with raising kids in the military. Traci offers some positive tips.

“It was different with our boys having to be uprooted and changing schools so frequently,” Traci said. “But I think they grew in ways we couldn’t imagine. They were able to handle change and adapt quite well to their surroundings. A lot of kids never get to experience that kind of change.”

The Myers’ made a special effort to connect ahead of time with the teachers on the bases to which they were relocating. Opening the communication for their children’s needs from the beginning made for a smoother transition.

They viewed frequent changes and relocating as a means of bringing their family closer together. The Myers’ depended a lot on one another during the moves and were able to come out stronger.

“It comes down to how proactive you are with your move,” Kevin said. “If the military is going to give you choices on where to move or tells you ahead of time, you have time to make arrangements to figure out details. Generally, I liked to start getting a feel for where they were moving us three months in advance. Then we began to research the location. If you are able to, planning can go a long way.”

“There are several resources the military provided that we utilized,” Kevin said. “There are intra-moving pamphlets, self-counseling Defense Personal Property System (DPS) programs all available by simply logging into a Web site. This will help give perspective on what the movers responsibility entail versus members responsibility.  The more involved you are, the less stressful the move will be.”

The military offers a great sense of community. Reach out to new neighbors in the area to lean on for support. They are some of the few people who fully understand the changes through which you are going.

Make a special effort to stay connected to past friends. Create a ‘group message’ on Facebook to where you can easily post updates to your current location and happenings. Or send out a yearly letter to friends with simple updates and contact information.

From the mover’s perspective:

“The more questions the local moving agents can answer, the better,” Kevin said. “The whole process will be much smoother if questions are asked upfront. If everyone is actively engaged and playing their part, the better the move.”

From the military perspective:

“Take initiative to communicate with your movers about specific instruction given by the military,” Kevin said. “For example, certain items need to be disassembled. Be proactive in addressing such details.”

Most moms can understand the pressure of maintaining a clean house. But have you ever gone through a base inspection – they are serious about their cleaning!

“We tried to plan ahead so we could minimize our pack time,” Traci said. “We would tape off rooms that did not need to be packed to avoid confusion. Once packers got done with one room, we would get a head start on cleaning for the base inspection. We did the cleaning ourselves until our last move, when we rewarded ourselves by hiring it done.”

It’s easy to get burnt out on packing, especially when you are doing it so frequently. Create a plan around your packing process so that you are able to reward yourself after. You spend a lot of time packing when you are moving with the military, so keep it to a minimum.

Can Moving Expenses Be A Tax Deduction?
Taxes and moving have a lot in common: they can both be stressful, costly and confusing. However, they don’t have
Read More

Thinking of Relocating for a Job? Here are 5 Things to Consider
Congratulations—you’ve received an appealing job offer! Perhaps it’s even your dream job… but it’s in a different state or country.
Read More

7 Steps Toward a Smooth Office Relocation
The promise of an office relocation can energize a company. However, the move can also feel overwhelming, especially when certain
Read More
Find a Local Agent
Enter Your Origin Zip Code
Loading...