Need a Vacation? Visit These Top Vacation Spots in the Country

Want to get away after a big move across the country or just need a vacation? You are not alone! About 89 percent of people in the United States are planning a summer trip this year, according to a survey by TripAdvisor and these are the top destinations around United States.

Key West, Fla. – The Southernmost city in the continental U.S. is a 120-mile long island chain connected to mainland Florida by US 1. Obviously the main attraction is the beach, but there is a lot to do and see, such as the John Pennkamp Park (the nation’s first underwater park), Duval Street, Theater of the Sea, the Everglades and Dry Tortugas National Park, just to name a few.

San Diego, Calif. – San Diego is known for their extensive beaches, mild climate year-round and natural deep water harbor. Things to do include Balboa Park, Belmont amusement park, San Diego Zoo, San Diego Zoo Safari Park and SeaWorld San Diego. San Diego hosted 32 million visitors in 2012. Between Coronado, the Ansa-Borrego Desert and the Laguna Mountains, there is plenty to do whether it’s relaxing by the beach or spending a day hiking and exploring.

San Francisco, Calif. – The City by the Bay is known for its cool summers, fog, steep rolling hills, eclectic culture, architecture and, of course, the Golden Gate Bridge, cable cars and Alcatraz Island. Every neighborhood in San Francisco has its own personality, but the most popular is the Marina District that has perfect views of the Golden Gate Bridge, Pier 39, cheese sampling at the Ferry building and Delores Park across from Ocean Beach. Fisherman’s Wharf is San Francisco’s most popular attraction where you can visit Pier 39 and see sea lions lounge on the rocks all day.

Virginia Beach, Va. – The city is listed in the Guinness Book of World Records as having the longest pleasure beach in the world. Virginia Beach is a resort city with miles of beaches and hundreds of hotels, motels and restaurants along its oceanfront. It is also home to several state parks, several long-protected beach areas, three military bases, a number of large corporations and two universities. The Virginia Beach boardwalk is three miles lined with hotels and restaurants with lanes for walkers, bicycles, roller blades, and surreys.

Orlando, Fla. – What else can you say about the city that has Disney World – aka the “Most Magical Place on Earth”? Orlando is one of the leading tourism destinations in the world, boasting 59 million visitors a year. The resort is 42,000 acres, with 24 resort hotels, four theme parks, two water parks and four golf courses. Other non-Disney parks in Orlando include SeaWorld Orlando and Universal Orlando Resort. 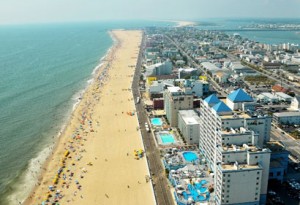 Ocean City, Md. – Ocean city stretches along 10 miles of beach from the inlet to the Delaware State line. It offers a three-mile classic wooden boardwalk lines with hotels, food, games and shopping. Ocean City is visited mostly by people living in the Mid-Atlantic region, which hosts 8 million visitors annually.

Destin, Fla. – Who wouldn’t want to go to a place that has beautiful, clear green water and beaches with the whitest, softest sand in the world? Destin is located on Florida’s Emerald Coast and sees 4.5 million visitors each year. One of the most popular activities in Destin is chartering fishing vessels. You can visit the two-year old Destin boardwalk that has water attractions, restaurants, zip lining and amusement rides.

New York, N.Y. – Home to more than 8 million people and the most populated city in the United States, the Big Apple hosts around 55 million visitors annually. The many districts and landmarks will keep you busy the entire time, with the most popular being Times Square, Broadway Theater District, Empire State Building, Statue of Liberty, Ellis Island, Central Park, Rockefeller Center and list goes on. No wonder why they call it “the city that never sleeps.”

Las Vegas, Nev. – Leave the kids at home and head to the Entertainment Capital of the World, which hosts the best casinos, shopping, fine dining and nightlife in the country. Stay and walk on the Las Vegas strip, which is 4.2 miles long and has 15 of the world’s largest hotels on it. The most popular, free attractions are the fountains at the Bellagio, the volcano at the Mirage and Festival Fountain at Caesar’s Palace. If you have any money left over after visiting the numerous casinos, go see one of the many shows Las Vegas has to offer.

Myrtle Beach, S.C. – The Grand Strand stretches 60 miles of the South Carolina coast, making Myrtle Beach a vacation destination for 14 million visitors in the spring, summer and fall months. With 87 golf courses in the area, Myrtle Beach is a golfer’s paradise. There is plenty to do, such as visiting Broadway by the Beach, Carolina Opry, Barefoot Landing, Legends in concert as well as countless restaurants and bars.

What other places are great vacation destinations for you and your family?

National Moving Month Calls for More Drivers
Bekins moves America through peak season The weather is nice, the leaves are green and peak season is upon us.
Read More

The Importance of Trucking on the Economy
Trucking is a massive industry in the United States. For example, 3.5 million truck drivers drive 15.5 million trucks loaded
Read More

Bekins Agent Rescues Customer from Rogue Mover
It’s the beginning of the busiest season for moving companies, which means the opportunity is high for rogue movers to
Read More
Find a Local Agent
Enter Your Origin Zip Code
Loading...